Travel to the islands of myth and adventure

Cruising around the Greek islands is in  itself a unique experience, one that you’ll want to relive again and again, whichever route you choose.

Create your dream vacation with a bespoke itinerary full of unforgettable experiences in breath-taking destinations.you are free immerse yourself and relaxation breathtaking views, and endless activities, all enveloped by the vitality of life at sea.

The seas of myth, freedom and the big blue. The Aegean and the Ionian. The epicentre of the Eastern Mediterranean, with 6,000 islands and islets. There are endless ways to get to know with sailboat.  Whether with your own, rented, with a captain and crew, or without. Scuba diving, water sports, competitive sailing, rallies in the Aegean. Revitalising experiences, full of luxury, relaxation, authentic moments in traditional fishing ports, cosmopolitan Greek islands and unforgettable fun. From March until October the Greek seas are an open invitation for all!

Sailing in the Greek islands: freedom and adventure
The sailboat’s bow caresses the waves. The wind picks up – the Greek Meltemi winds are a constant challenge. You sail sideways to the wind. You fly over and above the wave, tilt and touch the sea foam. A synchronised dance with an experienced ‘partner’. But that is the essence of sailing the Aegean in the summer. A powerful adventure. A sense of freedom. You slow the pace, and then pick it up again. The next port awaits.

The captain plots the course
Your morning begins with an excursion in a yacht to the islands. A pine-studded coastline, with secret coves, crystalline water, fishing villages. Sunscreen, sun hat, towel, bathing suit and you find your spot on the deck to take in the majestic view. You don’t have to worry about a thing: you’ve rented a boat with a captain that will take care of everything.

Each one of Greek islands is picture-perfect. The fishermen mend their nets and you wave to them from afar. Children run out to the marina and help your captain moor the yacht.  You smile, disembark and say good morning.

Luxury onboard
The crew has already taken care of mooring the boat, and you are carefree. The first aperitif of the evening is served in the lounge, along with a few delicacies prepared by your private chef. A unique trip to the islands of the Aegean with a yacht, with a full-service crew. Mykonos, Paros, Naxos, Milos. Rhodes, Kos, Symi, Sporades. The Greek seas promise unforgettable holidays aboard your luxury yacht, your ‘palace’, that will take you to unique and magnificent landscapes.

Travel to a mythical sea
Greece in September. Sailing and breathing in the sea of eternal myths and history. The islands and islets of the Small Cyclades parade themselves in front of you, with their emerald water and sea caves. The myths unfold with the waves. Nereas – the sea god that fathered fifty daughters, the Nereids, that lived in the depths of the Aegean Sea. Poseidon, the God of the Sea. The Gorgons. The Aegean autumn shines bright before your eyes, the light caressing the coastline. Live your myth in Greece.

In harbours near and far
Every boat trip in the Aegean, Ionian, Argosaronic and around the Peloponnese, is a trip to Greece’s ancient and modern history. The famous prehistoric settlement of Akrotiri in Santorini, and the cavernous villages of the Caldera with its inspiring architecture: Fira, Imerovigli, Oia. The Proto-Cycladic settlement of Skarkos in Ios, and its classical Cycladic Hora. Delos in its entirety, the most significant archaeological site in the Aegean.

Nearby Mykonos, synonymous with luxury and non-stop fun. Rhodes, with its Old Town and Lindos, and their mediaeval ambience. Knossos and Faistos in Crete, as well as the old cities of Hania and Rethymnos. Corfu, with its Venetian charm, whose town has been declared a Unesco World Heritage Site. Its imposing fortresses are considered masterpieces of fortification. And of course, Attica, with Sounion and Athens’ awe-inspiring Parthenon and world-renowned New Acropolis Museum. Drop your anchor and explore. Every destination has a fascinating history. 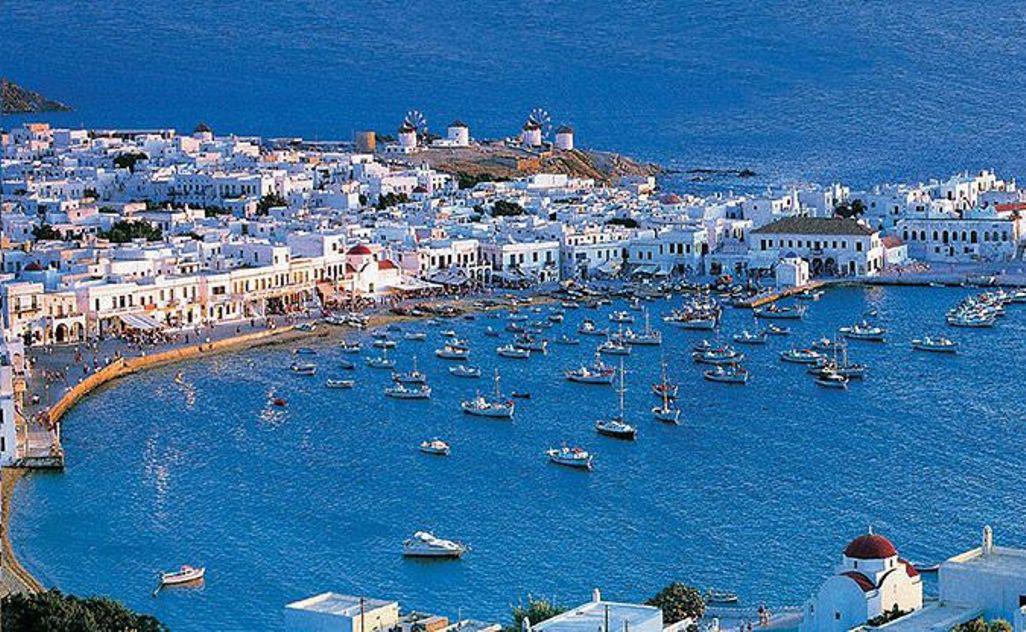 Wherever the wind blows
In Ancient Greece they were called Etesian, today the Greek winds are called Meltemi. They are the seasonal north winds that reach 5-7 Beaufort, and exist in the Aegean from May until September. They are the reason windsurf and kitesurf enthusiasts love coming here. They are the magnet that attracts competitive sailors, as they provide ideal sailing conditions, and reduce the distance between the Aegean islands. The Aegean Regatta, the Cyclades Regatta, the International Aegean Sailing Rally, the Crete Union Cup and the Rhodes Cup.  Experienced, skilful and daring sailors from all over the world come to be challenged, and ultimately rewarded. After the win, the celebrations are just as fun as the races. 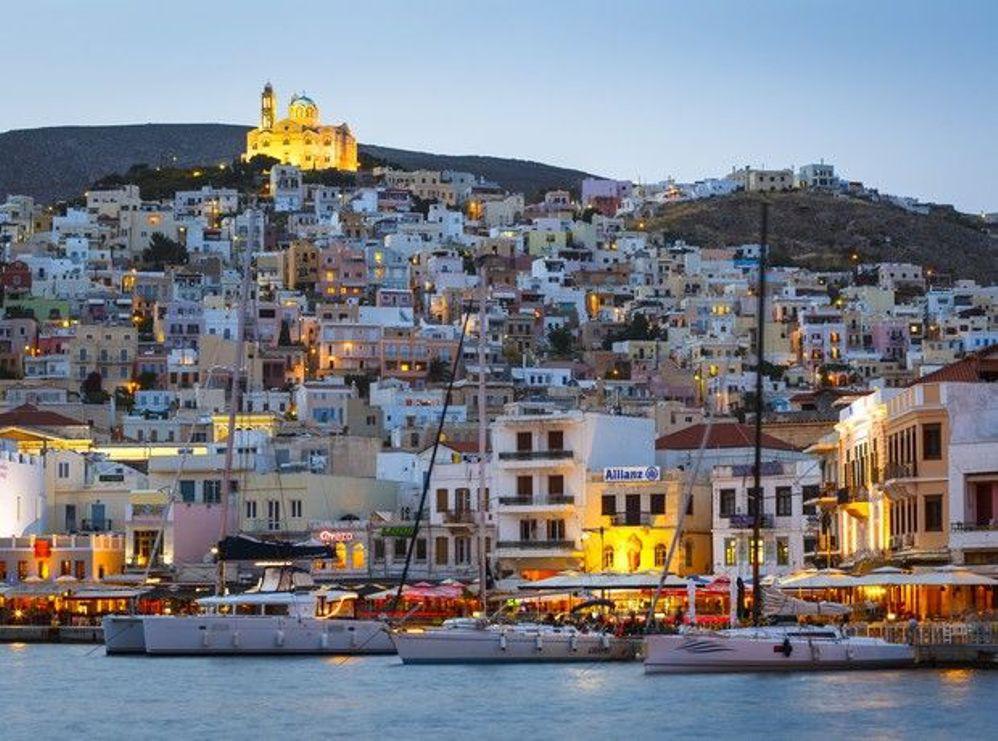 Your options for docking when travelling the Greek seas are endless, and the short distances between the islands of the Aegean and the Ionian allow you to improvise or change direction, depending on your mood. Corfu, Lefkada, Kalamata, Tzia/Zea, Alimos, Vouliagmeni. Porto Karras and Sani Resort in Halkidiki, Mytilini, Samos, Leros, Rhodes and Kos. Agios Nikolaos in Crete. Marinas that have high standards of service, safety, luxury restaurants, coffee shops, boutiques, sights and attractions, and traditional villages all around them.

Greek islands: a mosaic of experiences
They are so close, so many, and yet so different from each other. The Greek islands offer endless experiences. Discover virgin beaches, hidden coves, sea caves, islets. Visit picturesque ports, volcanoes, marine parks, impressive capes, ancient cities, lighthouses. Enjoy the experience of sailing from island to island. Get to know these unique Aegean islands, with hospitable people, quaint villages, diverse nature and authentic flavours.

Magical moments in the Aegean Sea
Sailing holidays in Greece. Docking in isolated beaches and secret coves. You’ll be mesmerised by the different shades of blue. Play with dolphins and follow the trails of Caretta caretta turtles in the sand. Cook on board, organise a barbeque on an uninhabited islet. Celebrate your wedding, honeymoon or anniversary at sea. Dock at one of the many fully-organised marinas in the Aegean.

At night, walk along the harbours and in town, through the cobblestone streets, restaurants, chic boutiques and bars. Savour the flavours of fresh fish and seafood, paired with local wines. Become one with the multicultural crowd of people, dancing until dawn. Magical moments in the Greek seas.